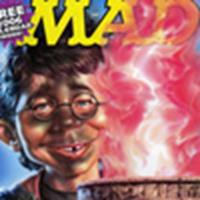 a Harry Potter parody. The issue covers the question of what would Harry Potter and the Goblet of Fire have been like if Mel Gibson, George Lucas, Woody Allen or the South Park team had been the directors.

Thanks to Jessica for the scans.