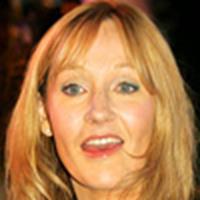 Does JK Rowling even exist?

In an interesting, yet funny article

from Norway, film director Nina Grünfeld asks "Is it possible that JK Rowling exists?" Grünfeld believes that Rowling is a pseudonym of a group of writers who have written the Harry Potter series, much like the Nancy Drew series. She asks how is it possible for a single mother to create a book that has been published into over 55 languages and sold more than 250 million copies in less than 10 years.

I think the secret behind JK Rowling is guarded more strongly than the entrance to Willy Wonka's chocolate factory. The truth, she believes, won't emerge until the market for Harry Potter is saturated, until the actress behind JK Rowling gets tired of her role and not until the real authors behind the pseudonym feel an enormous need for recognition.

The books offer evidence that just one author is behind them. He notes how it took three years to get the fourth book finished, and he sees consistent weaknesses in Rowling's writing that no group of hack writers would leave behind.