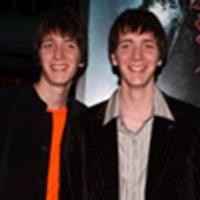 Some new interviews with James and Oliver Phelps, conducted when they were in Chicago this past weekend

Question: How was making Goblet of Fire different from the first three?
James: It was different because there was a bigger cast in it. The Beauxbatons came in then the Durmstranges, then Rob — Rob Pattinson, who played Cedric — then Katie, who plays Cho, Stan, who plays Viktor Krum, and everyone came in, and we all gelled really well and had a great time shooting, yeah.

with the Winston-Salem Journal Dan discusses the movie and his fans:

Question: What amazes you about Harry Potter fans?
Daniel: The amount of knowledge they have about that universe.... There was a kid who came on the set of the first film, and he couldn't have been older than 7. It was during the Christmas scene at Hogwarts. He watched as people were pulling open crackers in the Great Hall, and ... said, "That's wrong." And Chris (Columbus, the director) said, "What do you mean?" And the kid said, "There should be mice coming out of the crackers." Apparently, that was in the book.

And finally, BBC's Talking Movies has posted a video interview with Goblet of Fire director Mike Newell, which contains some new behind-the-scenes footage.