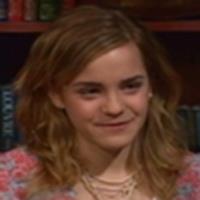 Video of A&E special & Emma on the 'Early Show'

Last night A&E aired a Harry Potter special in which many of the cast spoke about the new movie as well as the previous ones. In addition, Emma appeared in a taped interview on CBS's The Early Show where she discussed the movie.

You can view the A&E special below in QuickTime:

Or you can go here

(courtesy of Into the Pensieve

) to view in Windows Media (will take a while to download as the files are pretty big).

in a taped interview in which she discussed the movie.

You can view that interview here

in QuickTime and here

in Windows Media (courtesy of Into the Pensieve