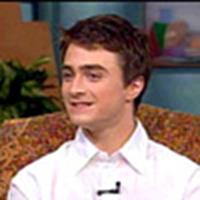 Video of Dan's appearance on 'The Early Show'

Dan Radcliffe, Harry from the Harry Potter movies, appeared this morning on CBS's The Early Show

. He discussed girls and trying to be clever, was asked about Harry and Hermione getting together, the Triwizard Tournament tasks and the rating of the movie.

UPDATE: You can now view the clip online