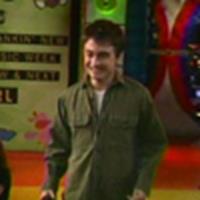 On this afternoon's showing of MTV's TRL

On TRL, he discussed the tasks for the movie, a clip was shown from the movie, stated that there is no kiss between Harry and Cho, and ended his appearance with a quiz. Sorry to report but Rupert Grint did not appear on the show.

On FUSE TV, he spoke of a self-proclaimed Mrs. Radcliffe following him in New York, played videogames on the Xbox, talked about December Boys (which he starts filming in 4 days), and introduced music videos. There are also video clips of cast interviews provided on the FUSE Daily Download.

, courtesy of Into the Pensieve

UPDATE: For those of you curious as to what happened to Rupert, you can click here