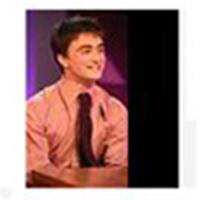 With the bandwagon known as promotion rolling along for Harry Potter and the Goblet of Fire, tonight Dan Radcliffe will be appearing

Some quotes from Dan on tonights show:

Daniel, now 16, reveals he hasn't yet acquired a taste for alcohol: "I don't like wine. I think it's something you get at 18, and suddenly you like it."

And that although he's old enough to marry, "I probably won't... yet".

He's already deciding what to do when he leaves Harry Potter behind: "I definitely want to carry on acting, anything that's different to Harry Potter. I'm filming something in Australia at the end of the year, proper hard work, a wake-up call."

Don't forget, if you can capture the interview please forward to us, thanks.

UPDATE: You can see the videos here

courtesy of DR.com. Thanks guys.

UPDATE II: To see the clip in it's entirety click here

(windows media) courtesy of The Snitch