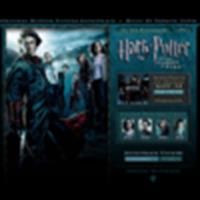 First there was the Goblet of Fire

website was re-launched and re-designed. If that wasn't enough for you, Warner Brothers Records has also created the Harry Potter Soundtrack

On the site only a handful of the Goblet of Fire soundtrack's songs are available to sample. Currently the songs in rotation are The Story Continues, Do The Hippogriff, Foreign Visitors Arrive, and This Is The Night. If you were able to view the other WB websites properly, there's no need to download software -- you can hear them as long as you have macromedia flash.

Additionally, online trading cards can be emailed to friends. The four currently featured are Harry, Ron, Hermione, and Headmaster Dumbledore.

Lastly, the official track list is provided. Unlike what was previously reported and listed at the AOL Music exclusive over a day ago, for some reason they have only listed 22 songs.