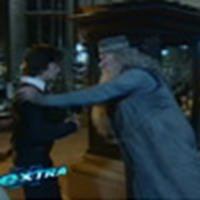 New footage from 'Goblet of Fire' on Extra!

Entertainment TV show Extra! in the U.S. showed a behind-the-scenes look at Harry Potter and the Goblet of Fire which included clips of Harry confronting Draco, behind-the-scenes footage, Draco as a ferret and Daniel talking about a stunt.

You can view the behind-the-scenes here

UPDATE You can go directly to Extra!

to view the video & read the story. You can also view the ferret scene only here

and we have some screencaps