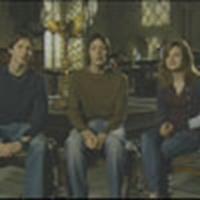 told you that Harry Potter stars James and Oliver Phelps (Fred & George Weasley) and Bonnie Wright (Ginny Weasley) would be hosting Harry Potter Secrets Revealed during the Kids WB show, in the U.S. on Saturday, October 29th, well now we have the commercial for you to view.

According to the commercial secrets from the movies will be revealed like how they turned Pettigrew into a rat and how to hang onto a dangling wizard. You can view the commercial here

You can also view the commercial in windows format here

Thanks to Patricia for clip.

UPDATE: Screenshots of the Phelps twins and Bonnie from this commercial are now available for you to view: