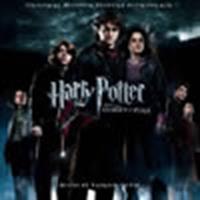 AOL has our first look of the "Harry Potter and the Goblet of Fire" original movie soundtrack cover, which is the same as the theatrical poster, on display at their online shop. You can go to the following links view the soundtrack cover:

Thanks to Yann of Univers Fantastiques for the tip!

UPDATE 2: Amazon has updated their listing with not only a cover image, but also a brief album description