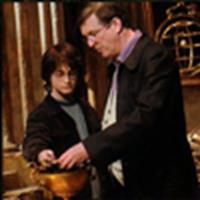 The November issue of Premiere magazine contains a feature on Harry Potter and the Goblet of Fire. The article titled Nobody Beats the Wiz - Inside the latest Harry Potter, as the young wizard confronts He Who Must Not Be Named has some new quotes from the actors.

UPDATE: You can see the scans of the article here

Everything we have done before has been building to this confrontation with Voldemort. Everyone felt a responsibility to get it absolutely right, to make it fantastic and terrifying, so as to not to let everyone down.

She's got this photographer with her all the time and everybody off-camera was in hysterics because she'd be writing with a massive quill, and every time she'd end with a flourish she hit the photographer in the face, over and over. It's little details like that that make it incredibly funny.