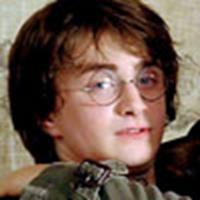 New pic of Harry and Hermione in 'GoF'

In a new photo sure to stir up spirited shipping debates, Harry and Hermione are seen clinging to each other (right as reporter Rita Skeeter snaps a photo of them for The Daily Prophet, actually).

The still is obviously from the recently released theatrical trailer but is larger and richer in color. It was published by MTV.com: