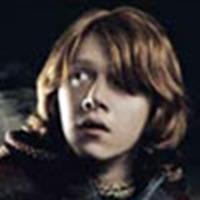 People in France have spotted several new Harry Potter and the Goblet of Fire character posters on their subway systems and we've got a few pics of them while we wait for the official versions from Warner Bros. They include new shots of Hermione Granger (Emma Watson) and Ron Weasley (Rupert Grint):

, which features a promotional shot of him we've already seen.