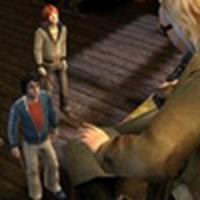 . The review explains that players will be able to play the game cooperatively and that they had worked with the film's production design to create a Hogwarts and a Tri-Wizard Tournament that "are both highly evocative of the forthcoming movie." You can also view some screen shorts of the game.

. The video shows Harry being chased around Hogwarts by the Hungarian Horntail and gives us our first look at the Second Task.

Also Nintendo Power magazine has an article on the new game in which they interview the game developers, have a small set report from the Goblet of Fire and two new images of Hermione and Ron from the movie. You can see scans of the article here

The video game is now available for pre-ordering from Amazon. It will be released

in the UK on October 28th and a week later