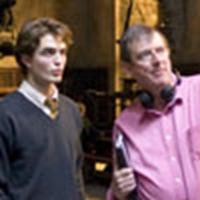 Four new behind-the-scenes photos from the set of Harry Potter and the Goblet of Fire have surfaced, featuring shots of Mike Newell directing several of the film's stars. Included are Daniel Radcliffe, Robert Pattinson, Miranda Richardson and others:

Thanks to Warner Bros. for sending high-resolution versions. (Thanks to Andrey at Bulgarian site Potter-Mania.com

for the original tip.)