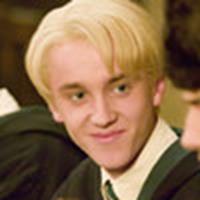 New 'Goblet of Fire' pics including first of Draco

We have our first look at Draco Malfoy (Tom Felton) from Harry Potter and the Goblet of Fire thanks to Bulgarian fan site Potter-Mania.com.

It features Gregory Goyle (Josh Herdman), Draco and Viktor Krum (Stanislav Yanevski) sitting at the Slytherin table in the Great Hall of Hogwarts. Draco's appearance remains pretty much unchanged from his dramatic makeover in Prisoner of Azkaban.

Thanks to Warner Bros. for sending us the high-resolution copies above (with thanks to Andrey for the original tip).