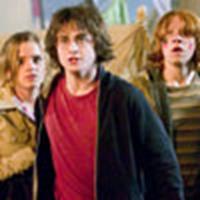 Warner Bros. has sent us a great new hi-res image from Harry Potter and the Goblet of Fire that features the terrific trio at the Quidditch World Cup campsite. The photo also includes Mr. Weasley, the twins and Ginny in the background.

for originally alerting us.