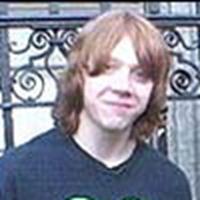 The sketch involved Rupert running around the National Portrait Gallery

in London with one of the hosts of the show and yelling 'boogies' to the dismay of the public. The winners of the show will participate in a special competition on Friday, Red Nose

you can watch the video as well as view some screen shots of Rupert's appearance.

UPDATE: RGMS has put up a better quality video

CBBC Newsround has additional information on the show here