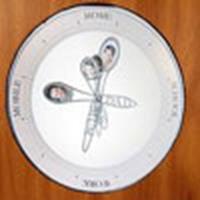 It would seem that the folks over at Microsoft have been reading the Harry Potter books to get ideas. At the Microsoft Techfest, an annual science fair, a digital wall clock

with hands for each member of the family instead of numbers made its debut. The hands of the clock point to home, school, work and mobile.

The clock won't be for sale anytime soon and was designed to expose employees to projects in development.

On another note, researchers and engineers from the University of Pennsylvania have developed a "plamonic cover

" which is similar to an invisibility cloak also from the Harry Potter series. This version of the cloak works by preventing objects from reflecting and scattering light.

The development, which works by preventing objects from reflecting and scattering light, could have widespread use in the military as it would be more effective than current stealth technology.

I guess reading and watching Philosopher's Stone and Chambers of Secrets helps everyone.