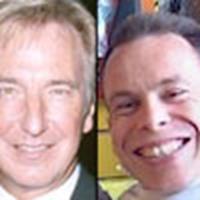 Director Garth Jennings reportedly told BBC Radio 1 just a few days ago that Rickman was to be the voice of Marvin the Android. Davis was confirmed earlier as the actor who will operate Marvin's robotic costume.

In the books, Marvin is a paranoid, terribly sarcastic character who is woefully unconcerned with the world around him. Rickman's casting has not been officially confirmed or announced (we'll keep you posted).

Thanks to Kate for the tip.