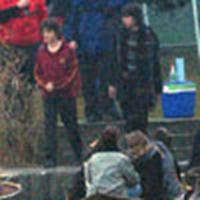 Additional photos of second task from 'Goblet of Fire'

and The Leaky Cauldron

have posted new photos of Harry (Daniel Radcliffe), Ron (Rupert Grint) and Hermione (Emma Watson) from this year's upcoming film adaptation of Harry Potter and the Goblet of Fire as well as some depicting the second task of the story's Triwizard Tournament. Some of the photos show Neville (Matthew Lewis) and Harry at the lake right before the second task is to begin. Enjoy.

You can view the pictures from both sites here