When 'Potter' fans get together, the plot thickens

In a special article already published on Wizard News

, published in November, is now widely available and includes columns and essays about J.K. Rowling's novels, from fans of all ages and backgrounds. Many of them hail from our good friends at MuggleNet

, in fact. Read the review below:

When fans get involved, the plot thickens

What happens when over 50 passionate fans get together? Arguments? Knock-down, drag-outs? Outright warfare? Well, when they're Harry Potter fans, and they're brought together by the great folks over at Wizarding World Press, the result is the best book of the year about the phenomenon and mystery of the world of Harry Potter.

The Plot Thickens ... Harry Potter Investigated by Fans for Fans

In her previous books, The Ultimate Unofficial Guide to the Mysteries of Harry Potter

, and its follow up, New Clues to Harry Potter Book 5

, Galadriel Waters waved her wand and all of her readers magically became HP Sleuths. In Galadriel's own words, "The Harry Potter septology is an epic mystery and is considerably more intricate than it appears. J.K. Rowling has painstakingly hidden puzzles and brain-teasers within her story line. She has divulged that she purposely concealed clues along the way, challenging us readers to discover them." 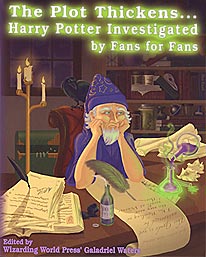 Through detailed breakdowns of each paragraph of each book, Galadriel uncovered the real book hidden behind the "children's" story that is Harry Potter, and we found ourselves going back again over books we've read countless times and finding new things we never saw before. Many fans all over the world joined in, but some more enthusiastically than others, as evidenced by participation the New Clues Forums on the MuggleNet web site.

But then, something J.K. Rowling herself has said many times started ringing in Galadriel's ears. When asked by fans how get started writing and being published, J.K. has replied, "Firstly, you need to write something a publisher would want to publish," and it struck Galadriel that much of what these fans were writing on the forums could be publishable! No one was aware of anyone having done a book like this before, especially on a global scale, but Galadriel and the Wizarding World Press folks are known for their unique and innovative style.

The Plot Thickens... consists of 65 essays written about Harry Potter by fans. They are not just kids (although one impressive essay is written by an eight-year-old) but they're also social scientists, lawyers, educators, physicists, literary scholars, three Ph.Ds, one Masters degree, and one kindergartener (the eight-year-old, but he'd already been published in his second-grade newspaper, so he's professional).

The book starts out with fifteen fans from around the world describing the Harry Potter experience from their unique perspectives, in the preface called "The Department of International Fan Cooperation." Here an Australian fan gets to brag about their Harry Potter stamps, unique in the world, and a Danish fan describes the pros and cons of reading Harry in another language, as does a fan in Germany.

There are also prefaces, written by the fans, about how complex and important the stories are, and what constitutes facts and good ways (and bad ways!) of formulating theories.

Then there are the essays, which make up the majority of the book. The essays are grouped together in topics like magic, birds (Fawkes and owls), moving pictures, mysterious things, and time travel.

In the magic topic, a fan in Argentina delves into the age-old question, does the Wizard pick his wand, or does the wand pick the Wizard? There is also an interesting discussion on Legilimency (mind reading) and Occlumency (closing your mind to a Legilimens).

In "Things That Go Bump in the Night," several essays are devoted to the mysterious veil in Order of the Phoenix. Who are the people that belong to the voices lurking out of sight? When you go through the veil, can you come back? Nearly Headless Nick knows, but he's not telling... There are also several very interesting essays regarding time travel.

In a section about the Weasley family, one writer poses the question, "Is Percy a stupid git?" There are also columns about Bill and Charlie, Ron's older brothers, and of course, Gred and Forge... oh, sorry, Fred and George... and their serious side -- which it seems they have -- even though at most times they appear to just want to make money and have fun. There are several essays about Harry's dad's fun-loving pals, the Marauders, as well. 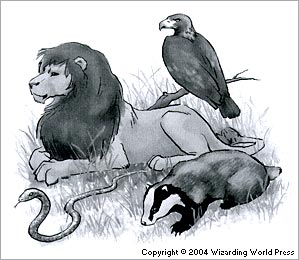 Interestingly, one character has more essays written about him than any other: Professor Severus Snape. Is he a good guy? Is he a Death Eater? What makes Snape tick? Why won't Dumbledore let him be the Defense Against the Dark Arts teacher? And what's up with the possible connection between Snape and Molly Weasley? In interviews, J.K. has repeatedly warned fans (especially the female fans) from liking the bad guys too much, so it's interesting to note that although some writers remain semi-anonymous, the majority of those who wrote about Snape appear to be women.

There are wonderful illustrations thoughout the book, and these have been created by fans as well.

The Plot Thickens... does a good job getting to the essence of the hottest topics that are currently consuming fans in the Harry Potter chat rooms. You may have already considered some of them, and many will be surprises. You'll definitely learn something new. While we're waiting for the next Harry Potter book, understanding these mysteries will give you a head start on all the twists and turns of the mysteries to come!

At over 300 pages long, and like the latest volumes of the actual Harry Potter books, it might be a bit difficult to lift, but once you do you won't want to put it down.

This article is Copyright © 2004, David Haber and may not be reproduced on other web sites or in print, in whole or in part, without expressed permission.