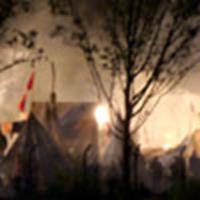 "It was a generally held opinion amongst those watching that Harry, Ron and Hermione could all be seen in action running through smoking and flaming tents!" said Broad.

Filming at the Harry Potter and the Goblet of Fire lot has been ongoing for weeks, and several fan photographers have snapped pics including some we posted last week.