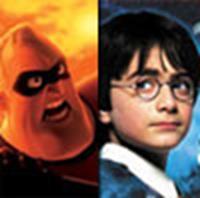 Pixar's latest film The Incredibles raked in over $70 million in U.S. theaters over the weekend, barely besting the company's 2003 debut of Finding Nemo, according to Reuters

The three-day weekend total was the best ever for a film released by Disney, and Saturday's $29.4 million was the highest single-day tally for Disney. Incredibles is the sixth release from Pixar Animation Studios Inc.

and The Walt Disney Co.

and all have been hits. Pixar makes them; Disney distributes them.

One record it couldn't break, however, was the best November 3-day weekend opening ever, which belongs squarely to Harry Potter and the Sorcerer's Stone with over $90 million in 2001.