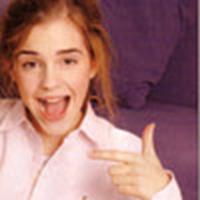 is of Emma in her trailer on the set of Goblet of Fire and this some of what the aritcle had to say:

“My parents and I are so excited about this,” puffs Watson, as we present her with the award formerly known as Least Irritating Child Performance Of the Year until so many of you complained, outraged at the slight. (Folks, we were kidding!) It soon turns out as we sit having a cup of tea in her trailer, that it’s a good job you did, too. “I do read Total Film, you know. I would have seen it!” Busted.