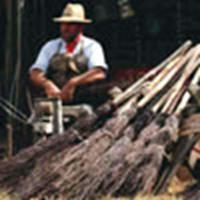 It would seem that Warner Bros. has picked up

80 new broomsticks from a 300-year-old family run business for use in Harry Potter and the Goblet of Fire which is scheduled for release in November 2005.

is still run by Arthur's family since his passing last year, with his wife, Sue, telling BBC News Online:

"I am absolutely thrilled. Arthur would have been so pleased - he was not very impressed with the brooms they used in the other (Harry Potter) films. He wanted to keep the business alive for his grandparents' sake because they did not get any recognition. He received the Royal Warrant in 1999 and this is just the icing on the cake."

Each of the brooms takes a year in planning & at his peak Mr. Nash could create 100 brooms a day, here is a picture

of some of the brooms. One can assume that these new broomsticks will be used in the scene from the Quidditch World Cup at the beginning of the movie.