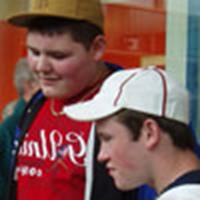 this weekend and dutifully snapped some photos.

HPANA member Phil sent in a few pictures along with a short report:

I arrived at the large shopping centre in the town of Milton Keynes, just north of London, at just gone 10 p.m. and on entering was faced by large crowds of eager fans wanting to see their favorite stars. I met up with several other HPANA members, who were all lovely and equally as excited as myself.

There was a Q&A session where everyone talked about how they were very like a family, how Matthew was clumsy like his character, and how they enjoy playing pranks on each other whilst on and off the set. Devon also spoke very fondly of his six horses and the new foul... saying his favorite was a horse called Ash, and then embarrassing his mother by pointing her out in the crowd.

After this we made our way back over to where they were signing autographs, and I got the Phelps brothers, while other people in my group got some of the others.

Over all it was a great day out and I would highly recommend that if you have a chance to go to the one early next year, go for it.

Phelps brothers with Phil and friend

Autographs from Oliver and James

Thanks to Phil for her report.