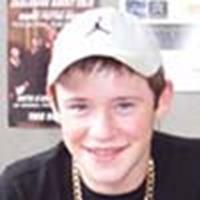 (Seamus Finnegan) from the Harry Potter movies today at Collectormania 6

in Milton Keynes, UK. He talked a bit about filming, Rowling's website and who may be the half-blood prince "No, seriously! Because I say, 'I'm half and half'... It's either me or else Hagrid."

This is what he had to say on working with Mike Newell:

Yeah, I miss Alfonso, I miss Chris Columbus, but we have Mike Newell now, he's a real good ?, incredible director, he's made my favourite film that I've ever seen - it was a film called 'Into the West' - and he directed that so, yeah, great working with him.

You read the rest of the interview here