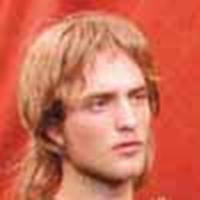 (Cedric Diggory in Goblet of Fire) from the film Kingdom in Twilight which is tentatively scheduled for release at the end of this year.