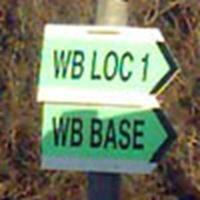 Thanks to faye, we have hard evidence of Warner Bros.' filming in Eastbourne UK

None of the stars were present, as the crew was shooting backdrops. It's not clear what scene or scenes in Harry Potter and the Goblet of Fire the imagery will be used for:

Signs to the shooting location

Getting ready to film

The helicopter with attached camera

Cliffs at the southern end of Eastbourne

Thanks again to faye for taking the time to snap and send these photos. While they're obviously not excitingly enthralling, it's good to see continued progress on the film.