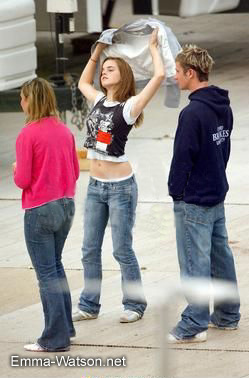 Daniel Radcliffe and Emma Watson of the "Harry Potter" films have been snapped by an eagle-eyed photographer on the set of "Goblet of Fire," which is due in theaters November 2005. Emma-Watson.net has posted the exclusive pics of the actors, who portray Harry Potter and Hermione Granger. The two have not said whether they intend to continue appearing in the film series, adapted from JK Rowling's massively successful books.

< Back to Radcliffe, Watson photographed on Potter 4 set on HPANA