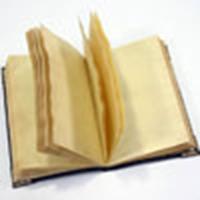 Two of Tom Riddle's prop diaries used in Harry Potter and the Chamber of Secrets have sold on eBay in a private auction for over $4,000 combined.

, which featured tubes that squirt black ink through the cover, was purchased for $1,900 using eBay's Buy it Now feature, which caused the auction to close early.

The two books were used during various filming of the second Potter movie in 2002.