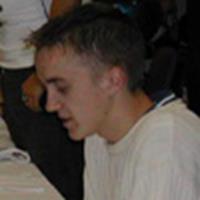 as well as some pictures

to come and meet him in person and had this to say about the turnout:

"I am really happy with the turnout. You can tell how much some people really want to be here, because they can't speak!"

posted about her experience. Thanks to Mugglenet

about the day's events.