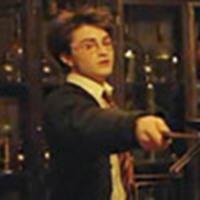 The Sun newspaper has an excerpt of an interview

that will run in the next two issues of Empire magazine in which Daniel Radcliffe discusses why he doesn't like to see himself in the first Harry Potter movie, what movies and music he likes and how he will probably celebrate his birthday in July.

Here are some of the questions asked and answered in the excerpt:

Have you gone back and watched the first two films at all?

I will probably watch them one day for fun — although I’m not sure how much fun it would be because I’m really self-critical. I don’t like watching myself at all but luckily I can detach myself from it. 'I'll see it again one day but I'm a big self-critic'

Do you have any plans for your birthday? (July 23)

I’ll most likely be filming but what normally happens is you get a cake from everyone on set and the great thing about filming when you have your birthday is that there are so many people there and you get loads of presents. You just have a little party on set.

Luckily all the people on set are really cool so I’ll have a good time. There’s one guy Will, my dresser, who’s become like my best friend.

Is Emma a lot more worried about what’s she’s wearing now, things like that?

Well Emma’s always been like that. Not in a bad way at all but she’s very style-conscious. I think what we wore in the early films contributed. You know, ‘I don’t look very cool in the films, so I have to try and look cool out of them’. Emma’s great. She’s a really nice girl.

Thanks to Jenna at DanRadcliffe.com

we have a larger scan

of the article from the Sun. Empire magazine goes on sale later this week in the UK & thanks to Amy for the tip.