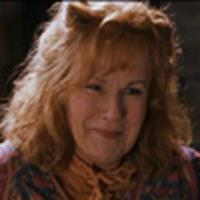 (Mrs. Weasley) from the Harry Potter movies has completed a hat-trick at the Bafta TV

awards and was named best actress for her role in the BBC adaptation of Canterbury Tales: The Wife of Bath

to be named best actress. Her previous BAFTA awards were for her work in Murder in 2003 and My Beautiful Son in 2002.