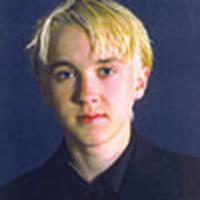 A fan of Tom Felton recently received a reply from the Draco Malfoy actor himself, in which he says he'll be attending the London premiere of Harry Potter and the Prisoner of Azkaban. He also plans to start an official fan club

for people to obtain genuine photos and "other goodies" run by his family.

MuggleNet has scans of his letter:

Note: The date of the premiere Tom stated in his letter has been purposely obscured since the actual date has yet to be finalized, according to official sources contacted today.