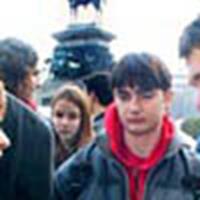 part in the world blockbuster Harry Potter and the Goblet of Fire.

Media reported that it will be clear next week whether there will be a Bulgarian boy cast in the role.