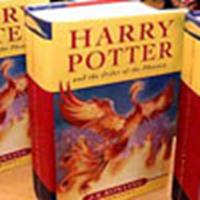 today it is releasing a paperback version of Harry Potter and the Order of the Phoenix on July 10. Scholastic will follow with the American version on August 10.

The company will release both an adult and children's edition, priced at £7.99, and "will be backed by a major advertising campaign."

pricing for its edition will be $9.99, with 896 total pages. The first printing of 2 million copies will bring the total of all Harry Potter books printed to 100 million, according to the company.

In related news, Polish fans finally got a chance to read book 5 in their native tongue, as it was released this weekend