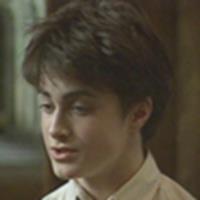 yesterday morning and had the chance to ask him some questions that his fans might find interesting.

Here are a few questions that Daniel answered:

Page: How do you manage your time, given all you do each day regarding filming, studying, rehearsing? What's your daily schedule from the time you get up until the time you go to bed?

Dan: Actually now that filming is done, it's nice to stop shooting, looping & dubbing. After 11 months I can sleep in now, and I'm looking forward to just chilling out, reading, watching films, and listening to music.

Page: Moving beyond the Harry Potter films, if you could choose any two combinations between a genre (i.e. action, fantasy, horror, or drama) and a character type (i.e. villain, or hero) what two would you choose together to act out in a film?

Dan: It doesn't have to be any certain type of film, I will do absolutely anything as long as it has a good script, and interesting character, and a good director.

Page: Fans have noticed in some recent pictures that you appear to have been "working out" for instance in a gym, do you have a regular exercise program during the week?

Dan: I don't have like a rigorous workout program, and there have been no changes really to working out other than working with David Holmes, whose one of my stunt doubles.

Check out the full interview