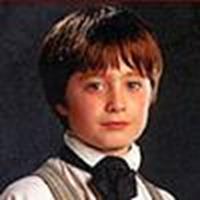 David Copperfield, Charles Dickens' semi-autobiographical novel, is a coming-of-age story, capturing the poignant comedy, tenderness and tragedy of the loss of innocence as children enter the adult world. Young David suffers the wrath of his stepfather, the abusive Mr. Murdstone; the betrayal of the charming sociopath Steerforth; battles the sniveling clerk Uriah Heep; and falls head-over-heels into a doomed infatuation with slow-witted Dora.

. It originally aired in December 2001, and most markets will see a new, different Masterpiece production

with Masterpiece Theatre in 2001 covering a range of topics:

Yes, definitely, because that's what the Harry Potter books really did; they introduced me to reading. At the moment I'm reading The Hitchhiker's Guide to the Galaxy. And watching films... films is my biggest of all hobby.

Do you have a favorite movie?

And do you have a favorite book?

It's either Harry Potter number two or a book called Holes by Louis Sachar. It's really good.