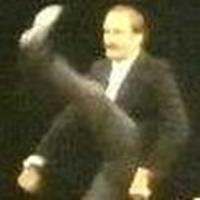 From Ministry of Silly Walks to Mayor

One of the silliest Monty Python

, aka Nearly Headless Nick, as the aptly named Minister of Silly Walks

, according to fellow Python Michael Palin

Michael Palin told London's Daily Telegraph that Cleese is "very involved with [his] local community" in Santa Barbara, and is thinking of running for mayor. He added that Cleese would "do a great job." As for his acting career, Palin stated, "He doesn't really want to do comedy anymore. He has a very active and inquiring mind." Cleese's appearances in the "Harry Potter" movies will "fund the rest of his life," says Palin.