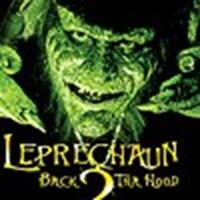 It would seem that Warwick Davis

, who portrays the vertically challenged Professor Flitwick, is at it again, frightening young children with his scary antics.

, or any of its many sequels, including this year's eagerly anticipated Leprechaun: Back 2 tha Hood

- rather, it's Warwick's protrayal of a small green gremlin

in TV ads for the Department for Education and Skills, aimed at promoting adult literacy, that's scaring the little tykes. Following numerous complaints that children were having nightmares after seeing the commercials, the Independent Television Commission ruled that they could not be shown before 7:30 pm.

The ads feature a small, green, human-type figure with pointed ears dressed in a boilersuit, who pops up and taunts an embarrassed adult about their reading skills.

The gremlin figure is played by actor Warwick Davis, who has played leprechauns and midgets and has starred as Yoda the Ewok in Star Wars and as Professor Flitwick in the Harry Potter films.

In one advertisement a gremlin took the receiver from a woman's hand as she was making a telephone call and then ran his fingers menacingly over her hand.

Of course, Star Wars fans will be quick to point out that Yoda isn't an Ewok and Warwick never played Yoda, who is in fact a muppet (and more recently, computer character) voiced by Frank Oz

. He did, however, star in the movie Willow.

Update: Davis will be appearing Feb. 8 in France for the Paris Toy Collection