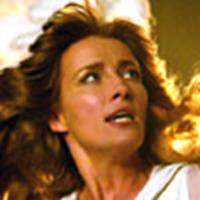 Thompson is an angel in 'America'

The reviews are in, and HBO Films' new $60 million production of Tony Kushner's play Angels in America

appears to have hit the mark. Packed with a stellar cast, including Harry Potter and the Prisoner of Azkaban star Emma Thompson

, the adaptation of the Tony Award-winning play "has a way of sticking with you. Love, sexuality, politics, society, religion ... days later, you may find yourself still pondering what it all meant."

From the Associated Press review

HBO's Angels in America is a grand achievement, a set of disparate characters and narratives that interlock powerfully. The cast is spectacular, with several of the actors playing multiple roles (fancy, [Meryl] Streep as a wizened old rabbi!). And [director Mike] Nichols channels the whole rambunctious affair into a sleekly told saga.

, concentrating more on the story of how it transformed from a play to a film.

You can explore the Angels in America official site

for more of these pictures. The first part of the movie premieres Sunday at 8:00 p.m. ET, and finishes the following week.