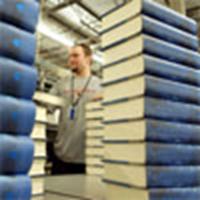 "JK Rowling has begun work on the sixth book about the boy wizard. As yet no date is fixed for its release," said Little.

The Sunday Times thinks even Rowling might be tempted to write past her publicly stated limit of seven books, as the latest adventure made her about £388 per word:

"She is a money-making machine. The temptation to keep writing after the last of her seven planned Potter adventures must be irresistible. She could be the first billionaire author in history," said Philip Beresford, who compiled the Sunday Times pay list