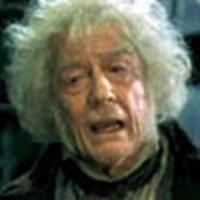 , aka Mr. Ollivander from the first Harry Potter film

, and recently the veteran actor was given the Richard Harris Award

by the British Independent Film Awards.

John Hurt, 63, won the Richard Harris Award for his contribution to British cinema. The star of The Elephant Man and Alien said he was "incredibly honoured".

was also honored at the event with the Variety UK Personality of the Year award, and he had a few things to say about the British film industry.

Sir Ian's frustration spilled over at the British Independent Film Awards, where the 63-year-old actor was honoured for his influential role in the entertainment world.

But rather than offering simple thanks, Sir Ian condemned the industry for failing to promote the huge wealth of technical and artistic talent in Britain.

, he asked: "Why are we happy in Britain to settle for small, independent films?

"Why wasn't a great film like Lord Of The Rings made in this country?"

Perhaps somebody should remind Sir Ian about the Harry Potter films? Just a thought...