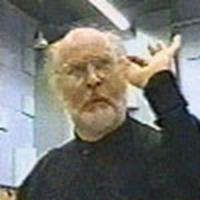 Radcliffe, Watson to appear in Mexico with Williams

NOTE: This story has been discounted as false. Read more.

Thanks to the barrage of e-mails we just received, we now understand the Associated Press in Mexico has confirmed

Daniel Radcliffe and Emma Watson will be guests of honor at John Williams' Harry Potter-themed concert Dec. 19 through 21, 2003 in that country:

I am Fran, from TotallyHarryPotter.org

and I have some GREAT news...

A friend called me at 10:30 a.m. to tell me that I had to buy a local newspaper (one of the most important ones here): Reforma. I went for it, searched for the "People" section.. and there it was. An article

about John Williams' concerts in México, which also confirms us that Daniel Radcliffe and Emma Watson will be there as special guests.

Mexico City, Mexico (October 15 2003) - The American music composer, John Williams, winner of 5 Oscars, will present on December 19, 20 and 21 at the Silvestre Revueltas Room, in the Cultural Centre Ollin Yoliztli, to direct the Filarmonic Orchestra of Mexico City, playing the Harry Potter music.

The main actors of the films, Daniel Radcliffe and Emma Watson (Harry and Hermione) will be there as special guests.

"It all came out as a circumstancial idea, because I am a total Harry Potter fan. After having a chat with John Williams, he liked the proposal, and there're going to be three concerts. There's a chance that an extra date will be opened at the Ollin Yoliztli, the house of the Philharmonic," commented José María Álvarez, programming director of the Orchestra.

A Magical Evening with Harry Potter is the oficial name of the recitals that will take place with the purpose of celebrating Christmas with children, explained Álvarez.

That's why, he said, that the children will be asked to dress as wizards, to give a warmer and cozier ambiance to the event.

The concerts will be focused in different sections of the original music of the films Harry Potter and the Philosopher's Stone, and Harry Potter and the Chamber of Secrets, and will also include music from Dukas (from Walt Disney's Fantasia), and some fragments of The Nutcracker, from Tchaikovsky.

"We'll make a special edition with images from both movies that will accompany the musical interpretation, which will be directed by John," said Álvarez.

"Even though the third movie of the Harry Potter saga was supposed to be released in December, that's not confirmed yet, and it might be released until March due to marketing plans. [b]Anyways, Daniel Radcliffe and Emma Watson have confirmed that they're coming to be present in the recitals[/b]," said Álvarez.

Williams, who has the record of being the person with the most Oscar nominees (47), has won only five Oscars and composing the music of movies like Star Wars, E.T., JAWS, Indiana Jones, and Schindler's List recognizes him. He has also won 18 Grammys, two Emmys and three Golden Globes.

Tickets are available for sale there, and they cost 250 Pesos.

for the link to the AP's story in Spanish